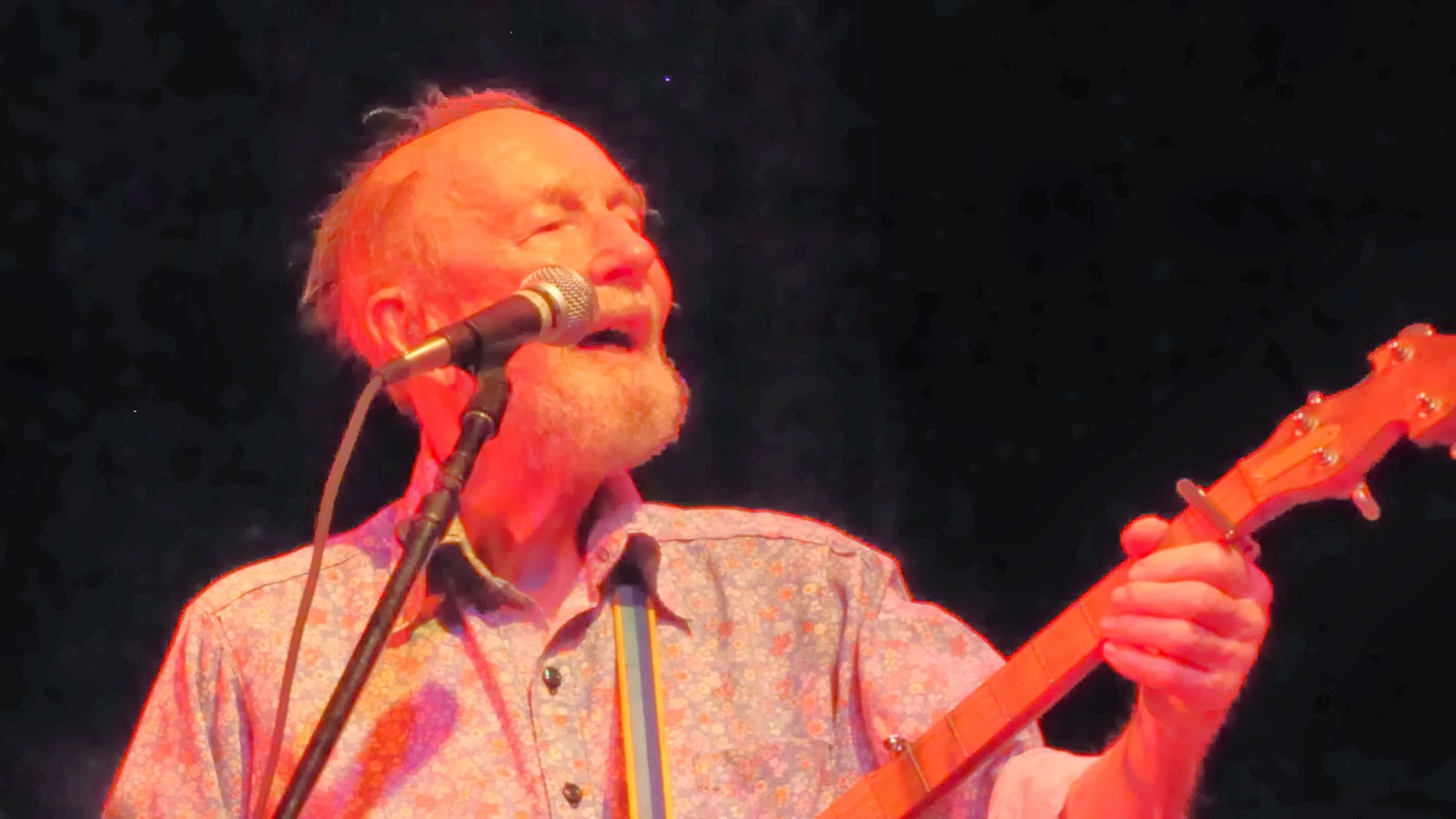 One of the highlights of my 2010 American trip was getting to see Pete Seeger in a rare, full-length concert, thereby fulfilling one of my life-long ambitions. I had to travel to Woodstock, New York (yes, that Woodstock), to catch the show, which took place at the Bearsville Theater. I wrote about that performance, in an earlier blog post headed, Pete Seeger – Living Legend. It was a great honor to see him in concert.

Singer, songwriter, actor, environmentalist, ecologist, humanist and socialist; husband, father, grandfather and great grandfather, Pete Seeger was all these and much more. When Pete Seeger passed away, it is not overstating the praise to say that the world lost one of its great champions and humanitarians.

Tributes have been flowing in for Mr. Seeger since his passing, from a veritable Who’s Who of fellow performers (Bruce Springsteen, Joan Baez, Billy Bragg), politicians (President Obama, Bill Clinton), and thousands of folk music fans and activists everywhere.

Pete Seeger’s passing will be an occasion for much sadness, personal reflection, and no doubt for renewed commitment to the important causes that occupy his, and our waking hours. The greatest praise we can extend to Pete is to honor his memory by continuing to sing his songs, and to get involved in the many causes and issues that were close to Pete's heart. Much remains to be done.

There are many great videos of Seeger available via YouTube, and I urge you to take a look at as many of them as you can. On learning of his death I immediately searched through my 2010 travel archives for the one song I recorded at that Bearsville performance. At the time, Pete was 91, and his singing voice was all but gone, but I was more than happy just to be in his presence, as I’m sure were other members of the sold out concert. I could have filmed much more, but I was more intent on enjoying the show. I did not want to be distracted by my camera, nor did I want to spoil the experience for other audience members. In the end, I satisfied myself with some photographs before recording Pete’s encore, the song, Quite Early Morning, which is embedded below.


Pete Seeger, Thank you for the joy your music has given me these past 50 years. Thank you for your boundless humanity; your optimism; your humility, and for the ongoing examples you continue to set as performer, songwriter, mentor, and advocate for peace and justice. For all this and so much more, I thank you.
Posted by Jim Lesses at 11:37 AM