Australian Centre for The Moving Image 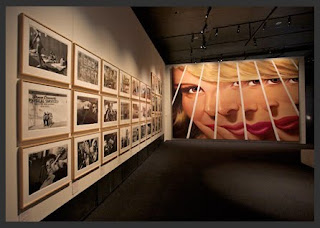 ~ The Australian Centre for The Moving Image (ACMI) is located at in the heart of downtown , and what an amazing place it is. If you are any sort of movie buff, ACMI will be high on your list of places to visit while you are in . In fact, yesterday, was my second visit to the Centre, and I still haven’t seen the current major exhibition: Dennis Hopper & The New . This is because there is simply too much to see and take in during one brief visit.

Across the three levels of ACMI, you can access ’s huge collection of moving images held by ACMI itself, and the National Film and Sound Archive (containing 1.4 million items). These archives include the earliest footage of the Melbourne Cup, and the landmark feature film The Story of The Kelly Gang (1906), as well as the latest award winning animations and so much more.

Then there is the ACMI studios which provides “Hands-on spaces for creative workshops, performances, talks and events”, while downstairs in the galleries you can visit major exhibitions, spend a good hour or two examining Screen Worlds which showcases the story of film, television and the new digital culture. You can also try your skills on a range of the latest computer games, or play a selection of old ‘retro’ games like Wolfenstein (remember that one) or many others.

Finally, as you would expect, the Australian Centre for The Moving Image would not be complete if it didn’t include several cinemas which screen full programs of the latest films as well as retrospective seasons of classic movies or films featuring specific actors – like Dennis Hopper.

Frankly, I’m jealous. I wish had something similar, but I am delighted to have been able to spend some time visiting this incredible facility. Not to be missed.

What: Australian Centre for The Moving Image
Where: Hours: (cinemas are open later)
Entry: Free for most areas (fees apply for major exhibitions)
Online: http://www.acmi.net.au/
Phone: 03 8663 2200