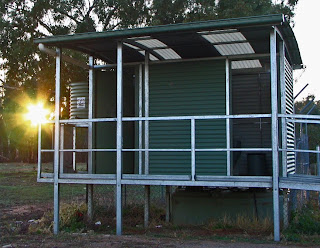 ~ Call it what you will: bathroom; toilet; lavatory; loo; restroom; latrine; bog; John; thunder box; the heads; privy; dunny; W.C.; khazi; outhouse; or finally, just the Crapper (after Thomas Crapper, the man who is supposed to have invented the modern toilet). Yes folks, if there is one thing that every traveller has in common, it will be the need to eventually go in search of a public convenience.

And nine times out of ten, you can never find one when you need it most!

Well, rest easy dear reader, relief is at hand. In my relentless quest to help you answer the call of nature, I have tracked down a couple of online resources that can help relieve the pressure when the need is most pressing.

If you are travelling anywhere in Australia, give thanks to the very helpful people at the Australian Department of Health and Ageing, who have produced the National Public Toilet Map, which, believe it or not, is a “Project of the National Continence Management Strategy”.

The home page for the National Public Toilet Map indicates the site provides locations for over 15,300 public toilets right around Australia, which you can search by post code, suburb, or by entering the name of the town or city you happen to be in.

On a much grander scale is the Sit or Squat website. Yes, that really is its name. Still in development, this site eventually aims to list every public toilet in the world. In the world, people. You need never be caught short again, now that those friendly folks over at Charmin Toilet Paper have teamed up with Sit or Squat to guide you to the nearest relief station.

In fact, as of this writing, the site lists 64,959 public toilets around the world. That represents an awful lot of relief for a lot of potentially desperate travellers, but I’m sure there are tens of thousands more public conveniences that are waiting to be added to the site – so get cracking. Visit the site and see if the public loos in your neighbourhood are listed, and if they are not, add them today.

However, given that technology is involved here, don’t be surprised if it doesn’t work as intended.

On a whim, I decided to look at the Sit or Squat toilet suggestions for . Now there’s a town that really knows how to test your limits for bladder control! If it wasn’t for the thousands of cafés, restaurants, Starbucks and McDonald’s outlets, ’s streets would be awash with… well, never mind... I think you get the idea.

If you walk down towards the , you will find yourself between Pier 81 and Pier 83, near where the Intrepid is moored. This area has been extensively redeveloped, and there is a large public toilet block where the Circle Line Ferries tie up. To my surprise, nay, amazement, Sit or Squat did not have this building pinpointed on their site.

Not to worry, the website allows visitors to sign up and add public toilets to the database. So being the good citizen that I am, I signed in and completed the online form with details about the missing loo. To my chagrin, Sit or Squat rejected my entry with a message stating that “the address you entered belongs to an existing toilet.”

“Oh, really?” said I, shouting at the computer, “Then why isn’t pinpointed on your map?”

According to Sit or Squat, the nearest toilets are at the New York Ferry Terminal at 39th Street - four blocks away! A man could get into a whole lot of trouble trying to run four New York City blocks with a full bladder, let me tell you!

Well, at least I tried. To update the information, that is - not run four NYC blocks with a... Oh, never mind!

Undeterred, I entered details for missing toilets on the Esplanade at Semaphore, a short 10 minute walk from home. This time I was successful. So the next time you are in desperate need of a public toilet while relaxing on Semaphore beach, and consult SoS for the nearest WC, you will have me to thank for showing you where it is.

And isn’t that a great relief?