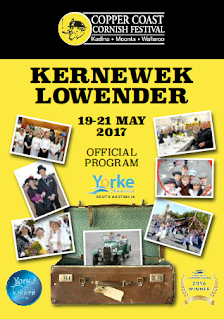 'Kernewek Lowender' means 'Cornish happiness' in the Cornish language, and the Kernewek Lowender lays claim to being the world’s largest Cornish Festival outside Cornwall. This year more than 40,000 people are expected to head to the region to celebrate the long-standing Cornish heritage of the towns. The Cornish pasties alone are worth the drive!

Also referred to as the Copper Triangle, this geographic region on Yorke Peninsula is so named for the copper that was mined in the area during the late 19th and early 20th centuries. Today the three towns at the centre of the region are proud to maintain their Cornish heritage at a festival that features fairs, traditional Cornish food (Cornish pasties and Swanky beer), Maypole dancing, Furry Dancing, a Cousin Jack and Jenny competition, and the selection of a May Queen.

See the full program for event details and shuttlebus services. 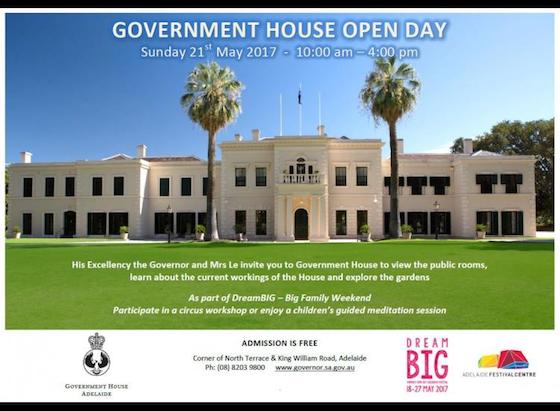 Government House will be opened to the public on Sunday, 21st May 2017 as part of DreamBIG - Big Family Weekend.

Government House staff and volunteer guides will provide an insight on how Government House is used in the present day by the Governor to advance the interest of the State.  Meanwhile, history enthusiasts can immerse themselves in a bygone era with historical displays and memorabilia.
Tours of the gardens will be guided by the Friends of the Adelaide Botanic Gardens.

TRANSITIONS FILM FESTIVAL 2017
The Mercury Cinema is proud to host the Transitions Film Festival – a visionary program, dedicated to spotlighting the complex challenges, cutting-edge ideas, creative innovations and mega-trends that are redefining what it means to be human.

Transitions presents positive, solutions-focused films and showcases cutting-edge ideas from around the world, along with the creative, academic, governmental, community and business leaders who are creating change locally. The Festival has been inspiring audiences and powering social change since 2012, hosting festivals in Melbourne, Adelaide and Darwin and facilitating screenings in Alice- Springs, Hobart and across Australia.

CityMag is celebrating Adelaide’s status as a UNESCO City of Music with a series on the music scene – from front bars to the local talent that’s gone abroad.

For every venue like the Grace Emily, Wheatsheaf and Governor Hindmarsh (all local hotels), there are at least another half-dozen smaller and lesser-known pubs clamouring for a speckle of recognition in Adelaide’s live music scene. Rarely do they host musicians with recognisable names or faces (unless it happens to be an old school friend, or a work colleague with a weekend alter-ego), and rarely will there be a line of enthused punters waiting by door, hoping to get front-of-stage.

If You Go
The North Adelaide Hotel 165 Tynte Street, North Adelaide
Open from 11am, Wed-Sun and from 3pm on Mon and Tues.
Read the full article here...

Versus Rodin: Bodies Across Space and time
At the Art Gallery of South Australia
North Terrace, Adelaide
Now through July 2, 2017