TED On Tuesday: Strangers In The Night?

As someone who has a tendency to travel for extended periods away from home on my own, that is as a solo traveller, I have learned to be comfortable in my own skin, and with my own company. However, one thing I have always tried to do is connect in some way, no matter how small or brief that encounter may be, with the local people in whose city or town I find myself.

Talking to complete strangers is not always easy. Often I find I would like the conversations to go on much longer, but for any number of reasons this is not always possible. Also, I would love to be invited back to someone’s home to meet family and friends, to get to know more about the people and their country, but this has only happened to me once. And it may surprise you to know, dear reader, that this was during one of my extended visits to New York City.

With this in mind, I must say I was delighted to watch Kio Stark’s TED talk, Why You Should Talk To Strangers, which she delivered in February 2016 at TED2016.

Kio Stark has always talked to strangers. She started documenting her experiences when she realized that not everyone shares this predilection. She's done extensive research into the emotional and political dimensions of stranger interactions and the complex dynamics how people relate to each other in public places.

“When you talk to strangers, you're making beautiful interruptions into the expected narrative of your daily life — and theirs," she says.

In this insightful talk, Stark explores the benefits of pushing past our discomfort when it comes to talking to strangers and embracing those fleeting but profoundly beautiful moments of genuine connection.

Stark is the author of the TED Book When Strangers Meet, in which she argues for the pleasures and transformative possibilities of talking to people you don’t know. Her novel Follow Me Down began as a series of true vignettes about strangers placed in the fictional context of a woman unraveling the eerie history of a lost letter misdelivered to her door. 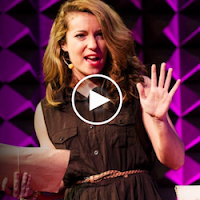 Love Letters to Strangers
As a bonus, I offer this short presentation from Hannah Brencher. Hannah's mother always wrote her letters. So when Hannah felt herself bottom into depression after college, she did what felt natural — she began writing love letters intended for strangers and tucking them away in libraries and cafes across New York City, for people to randomly discover. Through her blog HannahBrencher.com she began offering to write a letter to anyone who needed one.

From such humble beginnings, over the course of the next year, Hannah wrote and mailed out more than 400 hand-written letters. Truly it is said, From little things, big things grow, and indeed Hannah’s letter writing initiative has grown to become a global initiative, The World Needs More Love Letters, which rushes handwritten letters to those in need of a boost.