What good is sitting alone in your room?
Come hear the music play.
Life is a cabaret, old chum
Come to the cabaret!

Who could ever forget Liza Minelli’s rousing performance of this song in the 1972 Bob Fosse directed film, Cabaret? I’m sure that song will be heard more than once when Adelaide’s annual Cabaret Festival kicks off tomorrow night for two weeks of music, dance, comedy, and raunchy in your face theatre. All presented by some of the best practitioners from around the world.

Conceived by Adelaide arts identity and founding father of the Adelaide Fringe Festival, Frank Ford, the Festival emerged during a period of change and uncertainty. During the late 1990s the number of big stage musicals was in decline across the country forcing many talented performers out of work. At the same time, Frank Ford, had become concerned about the flood of visiting comedians in the Fringe program. ‘The Fringe was intended to be a national showcase for new talent in Australia but it was being upstaged by these comedians who were stopping on route to the Melbourne Comedy estival,’ Frank says.

Australians have a great tradition of musical theatre and political satire and both form a large part of the cabaret genre. And so the idea for a new festival was born. Frank approached then Arts Minister, Diana Laidlaw who committed funding to establish the first cabaret festival at Adelaide’s creative heart, the Adelaide Festival Centre.

The first Festival took place in May 2001 and featured Australian Jazz maestro James Morrison, musical satirist Phil Scott, and Australian musical theatre star Caroline O’Connor who was a late replacement for the legendary Nina Simone. A critical and commercial success, the state government committed to a further three years funding. “I loved that we started something from scratch where there was no existing audience and found 48,000 attendances by the second year,” said the inaugural Festival Director, Julia Holt.

Now in its 17th year and the biggest festival of its kind, Adelaide Festival Centre's Adelaide Cabaret Festival has continued to attract truly outstanding artists from around the country and the world. The Festival not only highlights the big names but makes them, too.

Here’s Liza Minelli in a clip from Cabaret, performing that now classic song. The video also includes the lyrics, so lubricate your tonsils and song along. Liza won’t mind — but the neighbours might!

The winning work of art is titled Sarah Contos Presents: The Long Kiss Goodbye and brings together personal remnants of Contos’ practice from the last four years, resulting in a colossal quilt that she describes as her most ambitious work to date.

Chosen from more than 450 entries from across the country, and selected by a panel of international and national contemporary art experts, Contos’ 2017 Ramsay Art Prize entry now becomes part of the Art Gallery of South Australia’s collection.

All selected works can now be seen in a major exhibition at the Art Gallery of South Australia. The exhibition runs through August 27, 2017. You can take a quick look at the other finalists from this years competition here… 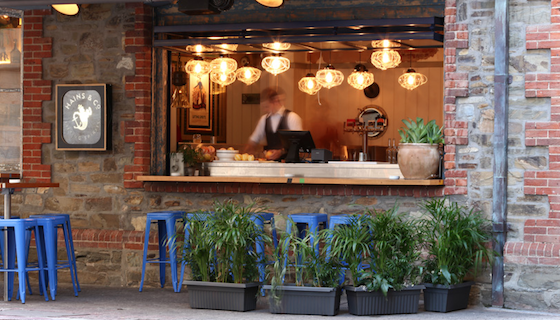 Hains & Co. brings us Nashville Hot Chicken
According to the reviewers at CityMag: "The Hains & Co. kitchen has taken a turn towards Tennessee and is your new favourite spot for fried chicken."

Hains & Co., the West End’s premier whisky and gin drinkery (located a very convenient distance from CityMag HQ) has long been known for their Break Even Bottle (three cheers for drunken socialism), and for being the one salve for the souls in need of spirits on public holidays. Recently they’ve added another card to their deck and have fired up the kitchen out back, letting chef Drew Aitken bring his Alabaman flair to the venue.
“I used to run a catering company out of there. We did some of our own food, but I closed the catering company at the end of October last year,” says Hains & Co. owner Marcus Motteram.
“We’ve been doing our own food still, but wanted to have something more focussed, so it’s Southern American.”

Online: H&C Website... | Facebook... | Zomato...
=====
Ten of SA’s Best Regional Restaurants
Speaking of food and restaurants, the latest issue of SA Motor, the magazine of the Royal Automobile Association of South Australia has a very tempting feature by David Day, in which he lists his selection for the ten best regional restaurants in the state. Among his choices are The Current Shed, McLaren Vale (“The lime tart – made from fruit from the orchard – with fresh coconut is a notable signature and a must-try.”); The Lane Vineyard in Hahndorf (“Chef James Brinklow shows great culinary poise, embracing prime local produce to conjure dishes of flair with an element of surprise.”); and The Loxton Hotel, Loxton (“shines as a star Riverland dining attraction”). Read the full article here…

Versus Rodin: Bodies Across Space and time
At the Art Gallery of South Australia
North Terrace, Adelaide
Now through July 2, 2017