Back in April, in the second of my South Australian Weekender columns I wrote briefly about the Port River Dolphin Cruises. Little did I know at the time that one of the two cruise boats that have been plying the waters of the Port River for more than 20 years, the Port Princess, had recently been sold to a cruise operator in another state.

It was not until I saw a press article in the online edition of The Advertiser, our daily paper, that I not only learned this news but worse, the article reported that the Port Princess (while on its way to its new home port), had suffered engine problems at sea that had left it completely incapacitated, and that subsequently the vessel had been swamped to the point where the crew of four were forced to issue an urgent May Day appeal and seek emergency assistance.

Thankfully, all four people on board the Port Princess were rescued before the ill-fated vessel finally filled with water and sank along a stretch of coastline which has long been referred to as The Shipwreck Coast.

Wow. Who could have guessed? Here’s a screen shot of the first part of that story… 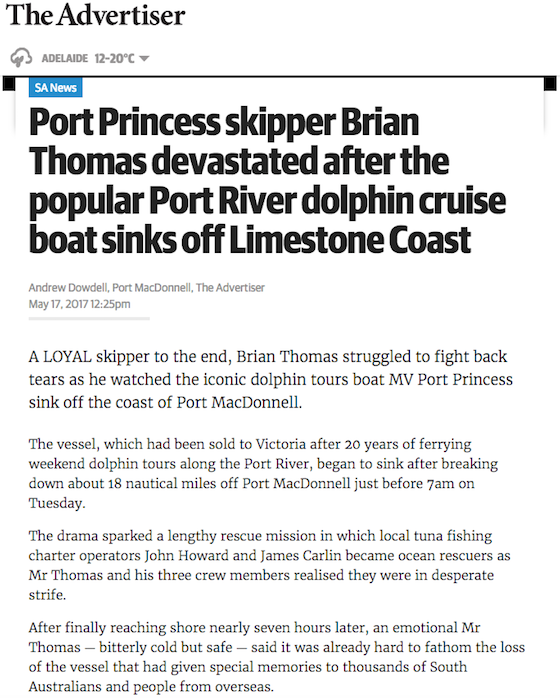 The good news for dolphin watchers is that the other Port River cruise vessel, the Dolphin Explorer is still making regular journeys up and down the river, and your chances of seeing wild dolphins is still as good as ever. So why not head down there this weekend and take a cruise? You’ll be happy you did.
- o0o -

2017 Pulitzer Prize Winners Visiting Adelaide
A brief reminder of this Adelaide Writer’s Week special event, which sees three prize-winning authors discuss themes of family, love, loss and the quest for freedom. Man Booker Prize winning Irish author Anne Enright has already come and gone, but (assuming the events have not sold out), you are still able to attend the Colson Whitehead and Hisham Matar evenings. Both Colson and Hisham are Pulitzer Prize winning authors. Below is a brief recap of their upcoming events.

A New York Times number one best seller and National Award winner, The Underground Railroad became one of the biggest hits of 2016 after Oprah Winfrey chose it for her book club. It tells the story of young slave Cora’s desperate journey to escape from a cotton plantation in Georgia on the eve of the American Civil War. Her escape is via the legendary, albeit desperately risky “underground railroad”, here imagined as a secret network of racks and tunnels underneath the American South, a journey that promises freedom.

Named one of the top books of the year by The New York Times, The Washington Post and The Guardian, The Return is Matar’s third work. When Matar was 19 and studying in England, his father was kidnapped in Qaddafi’s Libya. He never saw him again, nor did he ever give up hope that he would. The Return tells the story of Matar’s return to his homeland 22 years later to search for him. Hishar was awarded the 2017 Pulitzer Prize for Biography for his extraordinary memoir.

Versus Rodin: Bodies Across Space and Time
At the Art Gallery of South Australia
North Terrace, Adelaide
Now through July 2, 2017